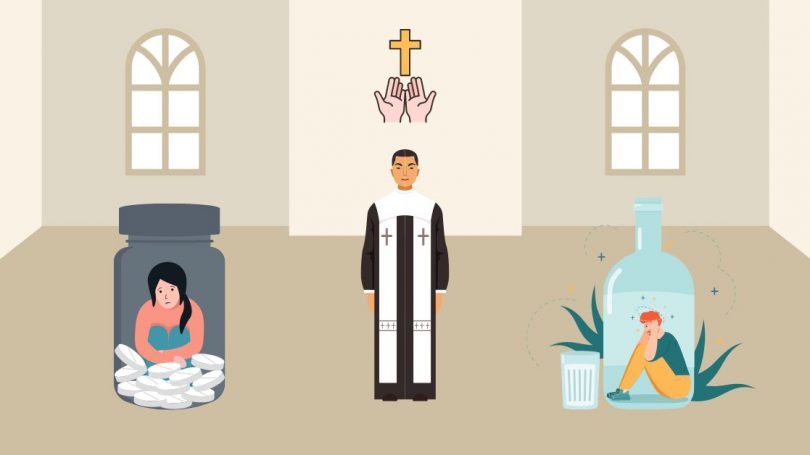 The Bible did not specifically address addiction. The term “addict” or “addiction” was not directly mentioned in the Bible. Thus, it is unclear for most people if addiction is a sin in the Bible.

Drug rehab centers can still use the Bible to aid addicts even though many translations don’t specifically address addiction. You’ll find that the Bible has much to say about substance abuse if you know where to look.

According to a 2007 Dialogues in Clinical Neuroscience article, addiction and dependency didn’t emerge until the 20th century.

Several verses in the Bible might be read to suggest that addiction is a sin, but there is disagreement on how to interpret them.

What Does the Bible Say About Addiction?

Many addicts are devout individuals who have lost control over their addictions. They might be embarrassed by their issues but are powerless to change. Conflict is common among Christians who battle substance abuse.

Some people perceive addiction as a moral defect based on biblical verses. For instance, Ephesians 5:19 advises concentrating on your connection with the Holy Spirit rather than binge drinking.

According to Proverbs 23:20–21, we should refrain from consuming excessive amounts of alcohol or meat because these people tend to become impoverished. Both can be seen as exhortations to avoid addiction and justify why engaging in such behavior is ethically unacceptable.

Most Christians view the Bible’s condemnation of alcohol misuse as an indictment of all drug usage. The Bible expressly forbids drug usage if the phrase “drunkenness” is understood to mean a broad state of intoxication to any drug.

Although it may not be explicit about drug usage, the Bible is very clear about sobriety (1 Peter 5:8).

We are warned in 1 Corinthians 10:13 that temptations may overwhelm us, but we are also given the tools to resist them. One of the temptations mentioned in this scripture can be drug usage.

Today, drinking and doing drugs are relatively common. One may say that addiction is a temptation. Many find it tough to handle. However, God offers a solution.

Although the Bible does discuss the moral consequences of addiction, modern science views addiction as a physical illness. While it might have begun with some sinful substance use, various factors contributed to it developing into addiction.

Many people, including Christians, believe that addiction is only a sinful choice. Drug misuse alters the brain, making quitting nearly impossible without medical detox and expert treatment.

Using alcohol or drugs once has insignificant long-term health impacts, according to some. However, the implications of Scriptures that forbid bodily harm are apparent. Any action that could endanger the body should be avoided (1 Corinthians 3:16-17).

You can still receive forgiveness even if you think abusing drugs or alcohol is morally wrong. The Bible references atonement and repentance (Proverbs 28:13). Turn to God for forgiveness and hope rather than continuing to live in shame.

Addiction may be viewed as sinful in a variety of ways. But just like any other sin, there is always a way to redeem yourself. God is merciful. We only have to find our way to go back to Him.

Whether you think sin and addiction are related or not, you might need professional assistance on the road to sobriety. Take action rather than allowing your substance addiction issues to make you feel ashamed and discouraged.