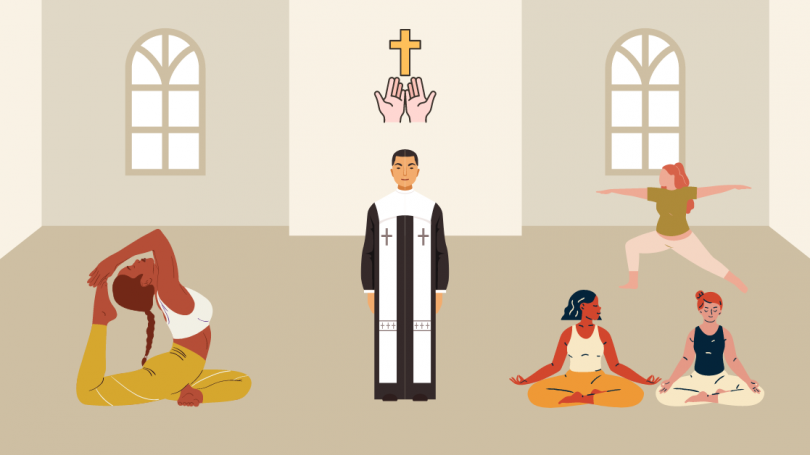 For quite some time, yoga has generated debate among Western Christians. A Catholic church in India issued a statement rejecting the notion that yoga and Christianity can come to terms in any way. But what does the Bible say about yoga? Is practicing yoga a sin?

Given that different people practice yoga in various ways and within various cultural contexts, this question about Christians participating in it is complicated.

Hinduism and Buddhism are the Eastern religions with which yoga is most closely associated. Many people who practice yoga in an Eastern religious setting combine it with meditation in order to further their spiritual aspirations. In Hinduism, it refers to a state of harmony with both your “divine self” and God and nature.

For Christians, the Bible says we meditate on God’s Word, that we are not divine in ourselves, and that God and nature could never be one.

What The Bible Says About Yoga

While it is not directly said in the bible that God forbids doing yoga nor it is a sin to practice yoga. However, in general principle, yoga and Christianity teach differently.

Yoga poses are said to be offerings to 330 million Hindu gods. This contradicts Acts 15:29 which says that we should abstain from offering or sacrificing things for idols.

Yoga focuses on controlling “life force energy” while performing exercises by using pranayama breathing. Ephesians 2:2 mentions dangers, including “the prince of the power of the air,” and Paul is not referring to oxygen here. It is playing around in a spiritual realm that we are not called to.

Yoga advises to “empty the mind,” while Christianity advises to “be transformed by renewing your mind” on God’s Word (Romans 12:2).

Christians do not think that in order to be united to God, you must attain a higher state of enlightenment. When we truly come to believe in the efficacy of Jesus’ death and resurrection as a means of salvation, His Spirit dwells within us, making us one with Him.

Should You Stop Doing Yoga?

Some people simply enjoy using yoga to align, lengthen, and strengthen their entire body because it has real physical advantages. Those yoga poses and stretching really does have positive physical effects on your body.

You must carefully consider the implications of what yoga means to you and what you are doing when you practice it if you want to follow Jesus and practice yoga.

If you don’t have a solid foundation of sound doctrine in your faith, some people might think that practicing any form of yoga is a bad idea. As many appealing spiritual concepts are presented in most yoga practices, they can be confusing.

People who practice yoga often distinguish between “real” yoga, which is led by a guru for spiritual enlightenment, and “light yoga,” which is merely physical postures that have health benefits for the body.

The religious doctrines upheld by these belief systems are unquestionably in conflict with what Jesus and the Bible teach. The Christian faith would never accept the notion that God and nature could ever be one.

If you do not have a good foundation of faith it can be easy to unintentionally incorporate opposing ideologies into your Christian faith. This can significantly impede your efforts to follow Jesus.

If you attend a yoga class as a Christian, you need to have discernment from the Holy Spirit, good counsel, and a well-understanding of Jesus and his teachings.

What Pastors Has to Say About Yoga

Most Christian leaders do not agree with what yoga practices teach. Here are some of them:

These two pastors are only a few of the Christian population who opposes the practices of yoga.

Many people engage in physical yoga poses for their bodies’ health benefits. Yoga, in my opinion, is a matter where we are free to come to different conclusions alongside other people — whether they follow Jesus or not.

Paul explains that the freedom we have in Christ is not an unbridled right to do whatever we please. A mature Christian will love their neighbors (Galatians 5:13–14).

The Holy Spirit is a very useful tool for Christians to use as a guide. When deciding whether to practice yoga, abstain from doing so, or pass judgment on those who do or don’t, look to the Holy Spirit for guidance.

However, 1 Corinthians 8:9 cautions, “take care that the exercise of your rights does not become a stumbling block to the weak.”