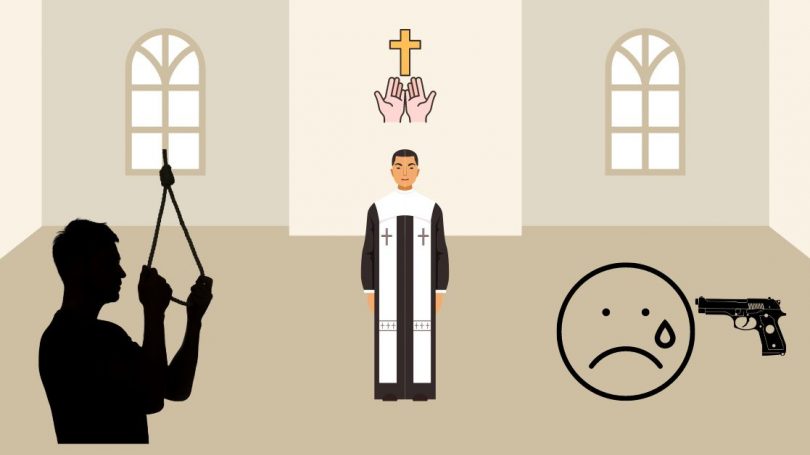 While there are many different interpretations of what the Bible says about suicide, most religious scholars (including myself) agree that suicide is a sin. This is based on the belief that humans are created in the image of God, and therefore have the right to life. Suicide is seen as an act of self-murder, which goes against the teachings of most major religions.

Suicide Events in the Bible

Six particular people who committed suicide are mentioned in the Bible:

Five of these individuals were known for their evil (the exception being Saul’s armor-bearer, about whom nothing is said). Some regard Samson’s death as suicide because he knew his deeds would result in his death (Judges 16:26-31), but Samson’s purpose was to kill the Philistines, not himself.

God is the source of life. He gives and takes lives (Job 1:21). Suicide, or killing oneself, is sinful because it rejects God’s gift of life. No man or woman should presume to exercise God’s power over his or her own life.

Some persons in the Bible experienced great despair in their lives. Solomon became so consumed with pleasure that he “hated life” (Ecclesiastes 2:17). Elijah was terrified, depressed, and yearning for death (1 Kings 19:4).

Jonah was so furious with God that he wished to die (Jonah 4:8). Even the apostle Paul and his missionary companions “were under immense pressure, well beyond our ability to withstand, to the point where we despaired of life itself” at one point (2 Corinthians 1:8).

None of these men, nevertheless, killed themselves. “Fear God and observe his commandments, for this is the obligation of all humans,” Solomon understood (Ecclesiastes 12:13).

An angel consoled Elijah, gave him permission to rest, and gave him a new mission. Jonah received guidance and correction from God. Paul discovered that even if the strain he was under was beyond his capacity to handle, the Lord can handle anything: “This happened so that we should not depend on ourselves, but on God, who raises the dead” (2 Corinthians 1:9).

What does the Bible say about suicide?

The Bible does not explicitly say that suicide is a sin, but there are a few passages that suggest it is. For example, in Exodus 20:13, God says “You shall not kill.” This is interpreted by most Christians to mean that homicide ( murder) is a sin, and since suicide is a form of homicide, it is also a sin.

Another passage that suggests suicide is a sin is in 1 Corinthians 6:19-20. Paul says “Do you not know that your bodies are temples of the Holy Spirit, who is in you, whom you have received from God? You are not your own; you were bought at a price. Therefore honor God with your bodies.” This passage is often interpreted to mean that we are not supposed to harm our bodies in any way, and since suicide is self-harm, it is considered a sin.

While suicide is seen as a sin by most religious scholars, there are a few passages in the Bible that suggest it may not be. For example, in Acts 24:15, Paul says “I have hope in God, which they themselves also accept, that there will be a resurrection of both the righteous and the unrighteous.” This passage suggests that even though suicide is a sin, those who commit it may still be saved.

Another passage that suggests suicide is not always a sin is in Romans 5:2-5. In this passage, Paul says that through Jesus Christ, we have been given the gift of reconciliation with God. This means that even if someone commits suicide, they may still be able to receive God’s grace and forgiveness.

Finally, in 2 Corinthians 1:10 Paul says “He has delivered us from such a deadly peril, and He will deliver us. On Him we have set our hope that He will continue to deliver us.” This passage suggests that even though suicide may be a sin, God can still save those who commit it.

So, while the Bible does not explicitly say that suicide is a sin, there are passages that suggest it is.

This is a difficult question to answer because it depends on each person’s interpretation of the Bible. For some people, the passages mentioned above ( Acts 24:15, Romans 5:2-5, and 2 Corinthians 1:10) suggest that God does forgive those who commit suicide. Others believe that suicide is an unforgivable sin because it goes against God’s commandment to “not kill.”

Personally, I believe that suicide is a sin, but I also believe that God is a forgiving God and will forgive those who repent of their sin. If someone is considering suicide, I would encourage them to seek professional help and counseling. Suicide is a permanent solution to a temporary problem, and there is always hope for a better tomorrow.