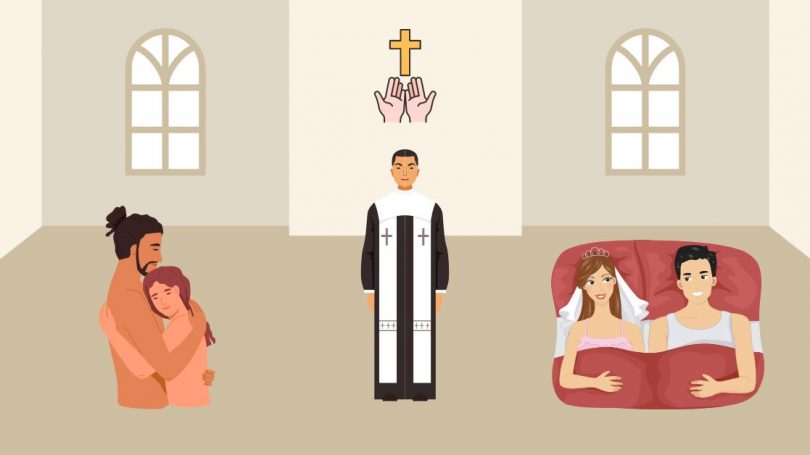 God created sex and we should be thankful for it. But is sex or having sex a sin in the bible? God declared sex, “good.” It is stated in the Bible “to be fruitful and multiply.” In other words, have lots of sex and enjoy each other.

In the ideal setting, sex is not a sin. Sex is an idea of God. However, Hebrews 13:4 considers sex outside of marriage to be immoral. God created humanity as “male and female” revealing that we are created as sexual beings. And with God’s command to “be fruitful and multiply” it cannot be fulfilled without sex Genesis 1:28.

Sex is a God-given mandate, so there is no way that sex is a sin if done with one’s lifelong marriage partner of the opposite sex.

What Does the Bible Say About Sex or Having Sex?

The story of creation, fall, and redemption must, at least in part, be a story about human sexuality because humans are sexual creatures—God made us male and female.

In Genesis 2:25, Adam and Eve were both naked and they were unashamed. They made love with each other and as a result, a son was born (Genesis 4:1).

Leviticus 18:6–23 forbids sex with those of the same gender, close relatives, and animals. Adultery (having sex with a married person other than one’s spouse) was punishable by death for both participants Leviticus 20:10–12, and pre-marital sex was “punished” by forced marriage Exodus 22:16. Rape also carried a death sentence.

That is one reason sex is not to be abused. Marriage is also the picture God uses to describe His eventual union with the redeemed as the future pure and glorious bride of Christ.

Question your intention, we aren’t looking for pure sex when our minds wander sexually. We are hunting to replace something missing in our relationships and our lives or to answer your curiosity. Figure out the origin issue and work to correct it so you can prevent the intention of having sex.

Pray, pray, and pray frequently. Lift the desires you are feeling and ask for help. God made you and knows you and can deliver you time and time again.

God made sex and romantic relationships so that we could expand our families and bring forth more creatures after his likeness. He does, however, desire that we carry it out as efficiently as possible.

God intended for sex to be a pleasurable way to protect the human species. But we must never forget that having sex before getting married and being unfaithful to your spouse are both considered sins. Committing adultery is a sin against both oneself and God.

Marriage, in all its facets, including the sexual aspect, glorifies God and reveals His perfections. It demonstrates God’s commitment, love, care, and faithfulness. This is one justification for why people shouldn’t abuse sex.