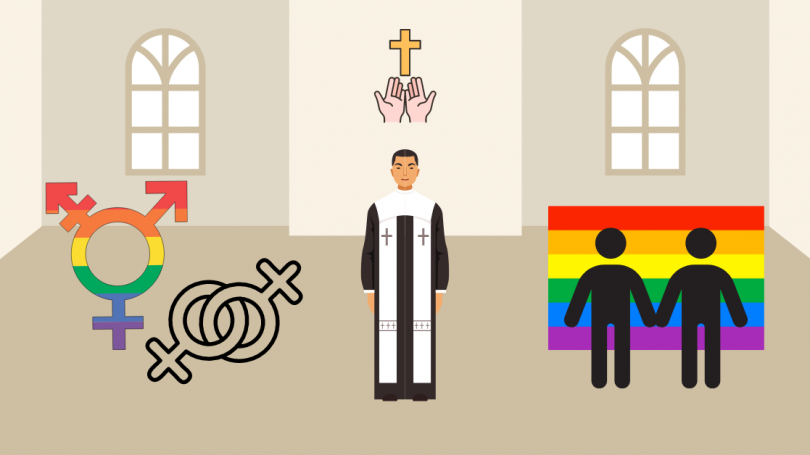 In the modern world, homosexuality is a complicated subject. The church and the LGBTQIA+ community have been the subject of numerous discussions. But what exactly does God say about homosexuality?  Is being gay a sin in the Bible?

For many conservative Christians and evangelicals, the answer is ‘yes.’ According to their interpretation, same-sex relationships cannot reflect God’s creative intent.

Their reasoning includes a core belief that sex differentiation is an essential component of Christian marriage.

What Does The Bible Say About Homosexuality?

Despite the fact that Genesis 1 and 2 contain passages that say God first created humans of the male and female sex, which is defined as the complex product of combinations between chromosomes, gonads, genes, and genitalia, it is important to note that there is nothing in the Bible that claims God only created this binary.

Scripture doesn’t imply that Christians should reject experience as a teacher because they respect biblical authority. This further complicates the case against same-sex relationships.

In actuality, Jesus’ statement about good trees bearing good fruit and bad trees bearing bad fruit should serve as our guide on how to learn God’s truth (Matthew 7:17–18).

Because of this, the first Christians were in a position to decide whether to allow gentiles who were breaking the law of the Old Testament into the early church (Acts 15:1-19).

Additionally, it served as the foundation for the Christian justifications that ended slavery and supported movements for women’s equality.

In these cases, the call for reforming Christian doctrine did not imply that the Bible should take precedence over human experience.

What they did propose was that Christians revisit the text and think about an alternative viewpoint that might more accurately capture God’s character in light of the obvious exclusion, injustice, and destructive effects of widely held beliefs.

Homosexuality: Not a Sin, Not a Sickness

The Christian Church had a very unfavorable view of human sexuality for many centuries: sex was for procreation, not for pleasure; women and slaves were viewed as males’ property; many heterosexual expressions, such as homosexuality, were condemned as sins.  Today’s churches are frequently still influenced by such traditions.

Today, other churches are influenced by a century of psychoanalytic thought that was supported by a significant minority in the medical community. They view homosexuality as a disease of some sort.

Even though the medical community has now thoroughly refuted this theory, some churches and clergy are still under its influence. Gay people are “imperfect,” according to them, and need “healing.”

Bishop Gene Robinson says that God continues to engage with us and continually makes Godself known to us. Much of a passage in John’s gospel is the conversation that took place during the Last Supper: “There is much I would teach you, but you cannot bear it at this time, Jesus tells his disciples. I will therefore send the Holy Spirit to guide you into all truth.”

A great illustration of how understanding has evolved more recently is in how we view people of color and how they are fully included in God’s reign as well as in our culture, society, and government.

Rev. Brandan Robertson believes that our gifts, perspective, and experience are vital to helping faith communities understand God and ourselves. He believes that all people, including queer people, are created in the image of God.

Therefore, we must embrace the full diversity of humanity in our midst in order for our faith communities to reflect this individuality and creativity that is a part of the very nature of our conception of God.

It is crucial to keep in mind that new knowledge about people and the world has frequently led Christians to reevaluate their beliefs throughout church history.

This need not be a justification for rejecting the Bible; rather, it should be a challenge for us to reflect on the historical and cultural backgrounds of the biblical writers as well as our own personal experiences.