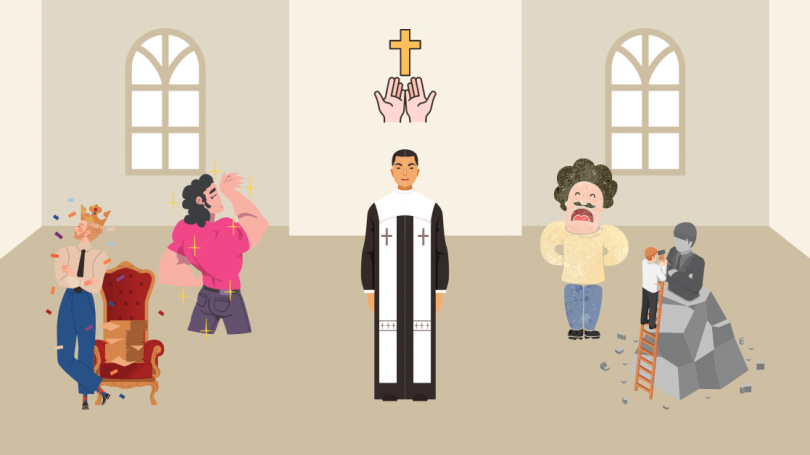 The Bible makes it abundantly clear that it is acceptable to uplift and correct one another and to take pride in God’s creation and other good works. Being God’s children gives us a reason for pride. But how does pride becomes a sin in the bible? Why is pride a sin? Is being happy with what you have accomplished always wrong?

Pride is defined as a high or excessive opinion of one’s own worth, merit, or superiority. It can be manifested whether held in the mind or shown through behavior. Pride can be both blatantly obvious and deceptively sneaky. It can be seeking compliments, fearing our own image, or harboring an overly critical view of ourselves.

Pride becomes a sin when it is focused and revolves only around ourselves. We have received everything we have from God. As long as you acknowledge that you couldn’t have done it without Him, it’s okay to feel proud of what you’ve accomplished.

In a sense, we are even expected to be proud of our achievements. The Bible exhorts us to exert ourselves so that we will be happy with the outcomes. “The diligent man values his possessions,” it says (Proverbs 12:27).

When Pride Becomes a Sin

Pride can be dangerous if we end up taking credit for what we’ve accomplished rather than acknowledging God’s assistance. Because it results in all other sins, pride is the most deadly of all sins. Pride is irrational, vindictive, and venomous.

Refusing to acknowledge God’s absolute control over everything is a sign of sinful pride. In order to give God the glory for your accomplishments, you must understand that you are powerless to do anything without Him (John 15:5). This is what is meant by “good pride.”

Alternatively put, anything that removes God from your heart is fatal. Anything that causes us to stand on the throne of our emotions is unquestionably problematic.

The Sin of Pride in the Bible

Eve was driven by the sin of pride when she consumed the forbidden fruit. Adam and Eve fell prey to the temptation of thinking they could become like God. What do you think the serpent really is? It was Satan, who was also destroyed by pride.

Pride turned the anointed cherub of God, Lucifer, into Satan, the devil, and the reason that Hell was made. Satan wanted all of the glory even though God had created him and given him all of the strength and beauty he possessed.

When he decided not to worship God for the gifts he received, he transformed into God’s enemy. He desired the throne, all of God’s power, and all of his glory. He believed that he was superior to God.

Since then, people have always had a hard time putting their lives and their circumstances in the capable hands of God, our Creator and Father.

There are three ways in which our sinful nature shows itself, they are:

People began to believe that Jesus was who He claimed to be as a result of witnesses to His miracles, but “Jesus would not entrust himself to them, for he knew all men. He was aware of what made a man, so he did not require the testimony of man (John 2:24-25).

Why Does the Bible Stress Pride as a Serious Issue?

.When we act with pride, we violate God’s most important commandment to love Him above all else. Our devoted Father disciplines us as any loving Father would, all the while sanctifying our hearts.

Isaiah 13:11 states that haughty arrogance will end and brutal pride will be humbled. We are very good at spotting these tendencies in the lives of others, but we rarely catch them in ourselves. Be cautious because when we see it in someone else, it’s frequently a reflection of our own arrogance.

Tangible things, worldly achievements, and an unhealthy reliance on and/or admiration for another individual will all be stripped away, and we will be humbled before God, who will undoubtedly remain.

The peace that Christ died to wash our lives clean is stolen by pride, which tries to persuade us to believe otherwise by leading us on a crazy and never-ending goose chase.

People should look for the signs that frequently lead us to lose our grip. Among these signs are:

God’s gift of faith kills pride. Faith looks outside of ourselves by nature. By continuing to follow Christ, we can recognize pride. The Holy Spirit will alert and convict us of the bonds of sin in our lives through prayer and study of God’s word and lead us through the process of sanctification to set us free. However, we must have ears to hear and the courage to follow His guidance.

Humility is the cure for pride. We adopt a humble attitude when we follow Christ. We ought to imitate his conduct. He was confident that God had a purpose for his life. The Word became flesh, Jesus, chose modesty. When we submit to the Lord, He will exalt us (James 4:10).

Keeping our hearts fixed on Christ is important to prevail in the battle against pride.