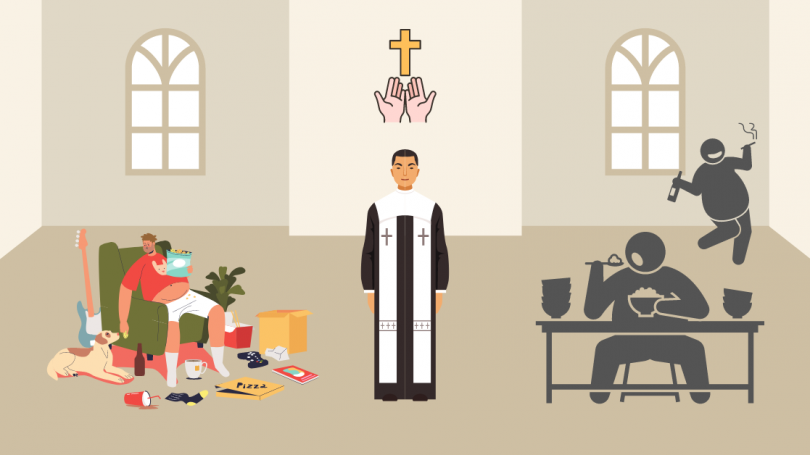 Self-control is a quality that Christians should exhibit and cultivate because the Bible declares it to be a fruit of the Holy Spirit (Galatians 5:23). Christians included, everyone eats and drinks several times each day. Some people have trouble exercising self-control when they’re eating. But is overeating a sin?

Because it displays a lack of restraint and self-control, overeating is considered a sin. In the Bible, overeating is linked to worldliness and laziness. The Bible contains numerous, unequivocal cautions against ungodly, self-indulgent eating.

In fact, the seven deadly sins include gluttony. Let us dig deeper into what gluttony means and what the bible says about it.

The overindulgence or lack of self-control in food, drink, or material possessions, particularly as status symbols, is referred to as gluttony. Gluttony idolizes food to satisfy our own self-love; the English word gluttony originates from Latin which means “to gulp.”

People, things, and even food and beverages can be made into idols. Food becomes a person’s master and an idol when they succumb to their body’s desires and urges rather than God.

God feeds the righteous, as Proverbs 13:25 demonstrates. The verse also shows that God provides sufficient sustenance. In addition, it tells us that eating until we are full is not sinful or improper and that it is not overeating. It is God’s gift to us to eat until we are completely satisfied. It does not mean that we only have to eat a little.

An Extensive View of Gluttony

According to St. Aquinas, gluttony signifies excessive concupiscence in eating; the first three ways are associated with the food itself, while the last two pertain to the manner of eating. He declares that fasting is an act of abstinence from food and drink that overcomes the sin of gluttony.

Why is it Difficult to Stop Overeating?

People struggle to stop overeating for a variety of reasons. Some foods that include caffeine and sugar have addictive properties that the body develops a craving for.

Another probable reason is that in some households and restaurants, large portions have become the norm. What is considered normal for certain sizes and quantities changes over time. For instance, a medium soda used to be 8 ounces; now, in some places, it’s 32.

Sin, whether it involves eating and drinking or not, is difficult to overcome. Overcoming sin, on the other hand, is feasible because of Christ’s death on the cross, through the Holy Spirit’s grace and the Word of God.

According to Isaiah 55:1-2, if we give ourselves to becoming satisfied with spiritual bread, wine, and milk, physical hunger will lose its supremacy. Boredom is the root of much gluttony.

Life is not always satisfying or energizing, relationships sometimes feel empty, and work is monotonous, but the food is always available and delicious.

So we must cultivate a variety of appetites for great and good things, such as:

Explore these other appetites so that you can be satisfied by things other than food. Then pray fervently and develop and nurture these joys of life.