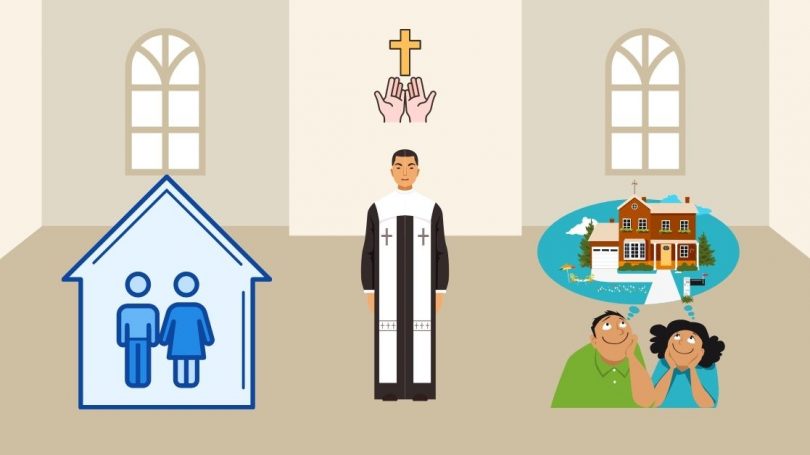 The Bible doesn’t explicitly state that cohabiting before marriage constitutes sinful behavior. Given this, many Christians think living together before marriage is not immoral. But what exactly is the Bible’s stand on this matter? Is it really a sin to live together outside of marriage?

The fact that living together as husband and wife was not common in biblical times, especially among Jews and Christians, maybe the reason the Bible does not make a clear declaration about it.

Let us dig into this topic further in this article.

The Bible’s Stand on Cohabiting Before Marriage

God only meant for couples to live together after marriage, as we can see in Genesis 2:24.

This Bible verse emphasizes the fact that a man departs from his father and mother, showing that the man and woman did not live together before they got married but rather with their respective families.

And as we can see in John 4:17–18, Jesus notes the Samaritan woman’s cohabitation with a man to whom she was not wed.

Jesus makes a point to disclose this fact to emphasize that she shouldn’t be living with a man to who she isn’t married, even though he does not want to judge this woman for doing so.

Why Should You Avoid Living Together Outside Marriage?

Living together outside the marital union opens you to sexual temptation. Couples having sex outside of marriage would be regarded as sinful because God intended for sex to be cherished between a husband and wife in marriage (1 Thessalonians 4:3-5).

Having sex before marriage is still sinful and displeasure to God, regardless of whether you live together and intend to wed. The Bible urges us to run away from anything or anyone that would tempt us to sin (1 Corinthians 6:18).

Thinking that you can be devoted to someone without getting married is unrealistic. There is no trust in a relationship if the couple cannot share life as one flesh and commit to a relationship that is honorable to God.

As Christians, we should be role models to our fellow Christian couples. For instance, you might be tempted to live together with your partner since you have clear physical boundaries and aren’t sleeping together.

But suppose a young Christian couple at your church admires you and notices that you cohabitate without being wed. They might believe it’s acceptable for Christians to cohabitate before marriage. However, once they do so and succumb to temptation, they risk committing sexual sin.

Christians shouldn’t cohabit before marriage if they want their union to reflect God. Understanding the repercussions of deciding to violate God in this matter is crucial.

According to the Bible, when we choose to defy God, we are ultimately rejecting God. We can also see in Ephesians 2:2 that disobeying God is equally choosing to obey the devil.

Is it Okay to Live Together as Long as You Do Not Sleep Together?

Some Christians will contend that living together prior to marriage is not sinful. Instead, the sin is cohabiting or having any sexual relations before becoming married.

Some unmarried couples may also assert that it is okay to cohabitate but not to sleep together.

However, just because the Bible doesn’t directly state if cohabiting before marriage is sinful doesn’t mean it isn’t. The best method to respond to this query is to consider the following:

It’s difficult to dispute that God would be happy with unmarried couples living together. It’s also challenging to refute that cohabiting before marriage constitutes a sin.

God wants his followers to be emotionally and spiritually dedicated to the man or woman they invest their time in rather than merely seeing how things work out in a cohabiting environment.

One of the most significant life decisions you will ever make is getting married. Marriage must be honored and kept pure (Hebrews 13:4).

Move in with someone you are prepared to form a lifelong commitment and a partnership in Christ through marriage. Ignore external forces.

There is nothing wrong with waiting till marriage before moving in together. You should reconsider and rethink where you are in the relationship if you have doubts about trust or commitment.