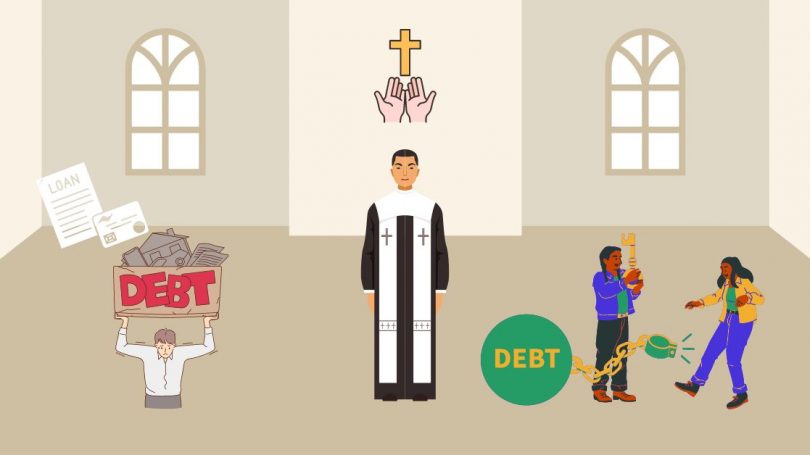 Being in debt means owing money to someone with the intention of repaying them in the future. Debt is not a sin or the result of disobedience, according to the Bible. We make this assumption based on what we’ve heard or what we’ve deduced from other scriptures we’ve studied, not because it states so explicitly.

A moral assessment of a debt issue entails forming an opinion about what led to the debt’s creation and judging the responsible party or parties accordingly.

There are several misconceptions regarding the biblical doctrine on debt. When the Bible actually does not support particular viewpoints, people frequently assume that it does. Therefore, let’s examine what the Bible does and does not state.

What Does the Bible Say About Debt?

The primary message of the Bible on debt is that it should be paid off, or forgiven. It only makes reference to one scripture that tells us not to guarantee a loan, doesn’t always speak to debt as financial, and is mainly concerned with how we react to debt circumstances.

Romans 13:8 is sometimes cited as “proof” that borrowing is wrong, although this text is really more about relationships than it is about money. Cases, where debt is simply inevitable, include medical problems, job loss, or bankruptcy.

The Bible makes it abundantly plain that when something is borrowed, it must be returned (Exodus 22:14). Someone who refuses to pay back shows a wicked heart, not the kind of giving and kind heart God wants us to have (Psalm 37:21).

It is crucial that we take our ability to repay into account before taking on any debt. Another concept, the principle of surety, is violated when borrowing without having a reliable means of repayment.

The fact that it is sinful to not pay back debts does not imply that it is always wrong for a Christian to file for bankruptcy. But in the end, a believer has a moral duty to pay back his or her debtors as much as possible.

When you diligently follow God’s teachings, you are blessed, able to lend, and have no need to borrow (Deuteronomy 15:6; Deuteronomy 28:12). Lending is preferable to borrowing, but not for the reason you would believe. God does not view loans as a means of increasing or making a profit, contrary to what our materialistic world would have us believe.

We are all urged to lend generously to those in need, as the Bible teaches (Leviticus 25:37; Matthew 5:42; Exodus 22:25). Lending is not about maximizing profit, according to the Bible.

While the Bible contains numerous cautions on the risks of debt, it never asserts that borrowing is against God’s will or a violation of one of His commandments. The prudence of taking on debt in particular situations is something we can discuss, but it’s never a simple yes or no decision.

The Bible makes no reference to debt as a test of faith. By taking out a loan, we are putting our faith to use, which is the same as stating that God must use a lender to provide for our needs.

In fact, we frequently substitute the lender for God and allow them to satisfy our heart’s wants rather than our actual necessities. This may be interpreted as a repudiation of religion in various aspects.

Some financially troubled Christians appear to think that God has promised to deliver them from their issues. They frequently cite Philippians 4:19 as the passage in question. God will provide for us in the finest way He knows how. He has not, however, pledged to remove the repercussions of our foolish actions.

How Debt Affects Our Relationship with God

Because it can negatively impact our connection with God in two significant ways, debt should be avoided.

First of all, while the Bible does not forbid borrowing money, it does caution against doing so and against making predictions about the future (James 4:13-15).

James warns against acting in a way that assumes the future because we don’t know what it holds because doing so is boastful, arrogant, and bad. Most current borrowing is based on future assumptions. It entails promising to pay back money even when you don’t have a reliable method for doing so.

Second, if you borrow, God might not have a chance to supply. As He has promised, the Lord will provide all of our needs (Philippians 4:19). Sometimes taking out a loan is only a quick fix to a problem that might otherwise drive us to develop our faith.

Borrowing money or being in debt is not a sin. If you find yourself in debt, keep in mind that God loves you and cares about your financial situation. He will still love you even if you have or do not have debt. Debt should be avoided though since it could have a bad effect on our relationship with God.