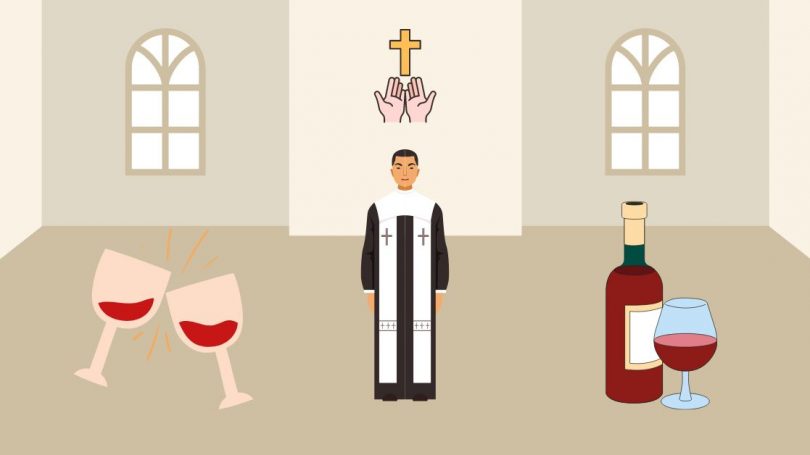 The Bible does not prohibit a Christian from partaking in wine, or any other alcoholic beverage. Numerous Scriptures include positive references to drinking (Ecclesiastes 9:7, Psalm 104:14-15, Amos 9:14).

While drinking wine is not sinful, what does it mean to Christians? Is it any different than consuming other kinds of alcohol?

The Bible’s Stand on Drinking Wine

Few things have generated as much discussion in Christian circles as wine consumption. The debate over this subject is interesting because it’s a recent one. Most Christian history has seen widespread acceptance and very little condemnation of moderate wine drinking.

Wine has not only not been forbidden, but they have also been a part of ecclesiastical tradition.

There is conflict over wine use throughout the Bible. It never criticizes it, but it frequently issues a warning against abuse. But the Bible does reveal a few things regarding drinking.

Here are some biblical lessons to guide us as we consider whether or not drinking is sinful.

The Bible Depicts Drinking Wine as a Gift From God

Wine is viewed as a gift from God in the Old Testament. Deuteronomy 7:13 and 11:14 declare that God blesses wine, and a few chapters later, they claim that the absence of wine is a curse (Deuteronomy 28:38, 51). According to Psalms 104, wine makes the heart joyful. Additionally, remember that Jesus’ first miracle was turning water into wine.

The Bible places tension on drinking. On the one hand, it discusses how it might be a blessing. On the other side, it also warns about the negative consequences of misuse.

Wine misuse is clearly defined as a sin in the Bible. It has caused many people to believe that all drinking is wrong. That, however, is not what the Bible says. The Bible doesn’t state anything. Thus, that would be added to it. It merely serves as a caution against addiction and intoxication.

The Bible Does Not Forbid Wine In Moderation

The truth is that there isn’t a single scripture in the Bible that expressly bans moderate drinking. Additionally, no verse defines precisely how many drinks you can have or what being intoxicated means. The Bible is ambiguous on this issue. The only sure thing is that abusing wine—whether via excessive drinking or addiction—is wrong.

“So, whether you eat or drink, or whatever you do, do everything for the glory of God,” Paul writes at the close of a chapter in 1 Corinthians 10:31, where he covers various attitudes about eating, drinking, and marriage.

But what about present-day beliefs and behaviors? Shall we only apply the biblical prescription for moderation to the present day?

Contrarily, certain scientific, historical, and cultural circumstances make drinking-related personal and business decisions more challenging than they were in the past. Today’s attitudes need to be influenced by both theological and contextual factors.

Inaccuracies Regarding Wine In The Bible

One frequent counterargument is that wine in the Bible is grape juice. Or it wasn’t truly booze because it was so dilute with water. Therefore, neither Jesus nor the authors of the Bible supported drinking. The issue is that Scripture does not support that.

It is true that many of the wines likely had a marginally lower ABV than wine produced today. But according to the Bible, there was still plenty of kick in the wine to become drunk on. Jesus was charged with being wine drunk because of this (Luke 7:34). And that’s why the Bible forbids drinking too much wine.

Damage to Your Witness (or Testimony)

Drinking negatively affects your ability to connect with individuals around you in some cultures.

However, most non-Christians are not deterred by drinking in western culture. But the arbitrary rules put in place by Christians turn them away.

I doubt that by observing me drinking a wine, my agnostic friends will ever turn away from God. Having a glass of wine with your neighbor and dispelling some common myths about Christianity might assist your witness.

In most circumstances, having wine won’t harm your witness in the United States. Where you live will determine that; it’s not a universal truth. However, drinking in moderation won’t damage your reputation in western societies.

Is it Wrong for a Christian to Consume Wine in Public?

Each specific circumstance will determine the proper response to this issue.

Keep in mind that becoming drunk is not what we are discussing. We are referring to drinking one or two glasses of wine.

The answer is yes if a Christian harms another Christian (a former addict or someone who may be predisposed to becoming one) out of selfish motives by partaking in wine. I would strongly advise against going there and against assuming anything.

Wine is neither addictive nor dangerous when used in moderation. In reality, several medical professionals advise red wine use in moderation due to its positive effects on health, particularly the heart. Christian freedom allows for the occasional use of minor amounts of wine.

Both alcoholism and addiction are wrong. However, it is frequently better for a Christian to abstain from consuming wine due to biblical concerns about wine and its consequences, the simple temptation to drink excessively, and the potential to offend and stumble others.