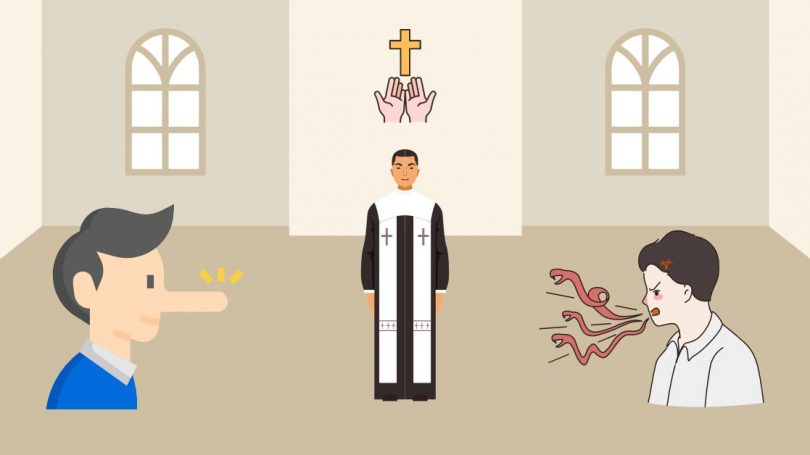 We all lie because we are flawed beings. Whether we’re making up stories for our pals or hiding our past transgressions, it almost feels like we can’t help it. But are lies—big or small—sinful? Or is lying merely something that humans do?

One of the most prevalent sins is lying. Since most falsehoods go uncovered, lying is comparatively simple.

We think that most of our lies seem harmless enough, such as when we alter the truth to make a story easier to speak. Or when we add a little extra to our accounts of our activities to make ourselves seem like better people. Or when we pretend to be okay when we’re not, or even when we give someone a compliment that isn’t really what we’re thinking.

We tell small lies so frequently that we no longer experience the same conscience and wrenching sting that comes with “larger” lies or more alleged offenses.

What Does the Bible Say About Lying?

Many things regarding lying are found in the Bible. Here are a couple of verses related to lying.

Numbers 23:19 and Hebrews 6:18. These two verses illustrate that God is both unable and unwilling to lie. It suggests a response to our query on whether lying is a sin. If sin is missing God’s mark, then when we tell lies, we also fail to live up to God’s standard of not lying.

Proverbs 6:16-19 distinguish between “a tongue that speaks lies” and “a false witness who pours out lies.”Proverbs lists gossiping, lying in court, and lying in a way that damages others as two of the seven things the Lord detests since the Lord was so fiercely opposed to these types of lies.

In John 8:44, Jesus calls the devil “the father of falsehoods” and declares that individuals who tell lies “belong to [their] father, the devil.”

Revelation 21:8 comes after a lovely depiction of the new earth and heaven, where there would be “no more death, or bereavement, or tears, or pain” (Revelation 21:4). Some, including all liars, will not be accepted, nevertheless. In the eyes of God, lying is a crime worthy of the sulfur lake.

A straightforward explanation of why it is a bad idea to create anything based on lies is provided in Proverbs 21:6: Lies don’t hold up. When you are inevitably discovered, everything will fail. Someone will be able to cut through the lies like a fleeting vapor.

Lying is a work of evil. Whether it is a small white lie, it doesn’t remove the fact that you still lied. It is purely against the teaching of God. As Christians, lying should not be something that we include in our daily lives.

We all need to recognize and keep in mind that speaking a lie is common. Everybody lies, often multiple times per day. Sometimes the lie is a simple “white lie” created to make someone feel better. Sometimes it seems as willful deception or self-delusion, papering over significant concerns.

People can sometimes fool themselves. They eventually reach a stage when they aren’t even aware that they are lying or spreading a lie.

If we ask God to aid us with awareness and with building healthy habits of always telling the truth, He provides us the tools to battle and triumphs against this terrible human tendency.

If we lie, we should ask for forgiveness and repent. We must also acknowledge the possibility that this spiritual disease can affect Christians. Never give up on overcoming and pursuing that unending victory.