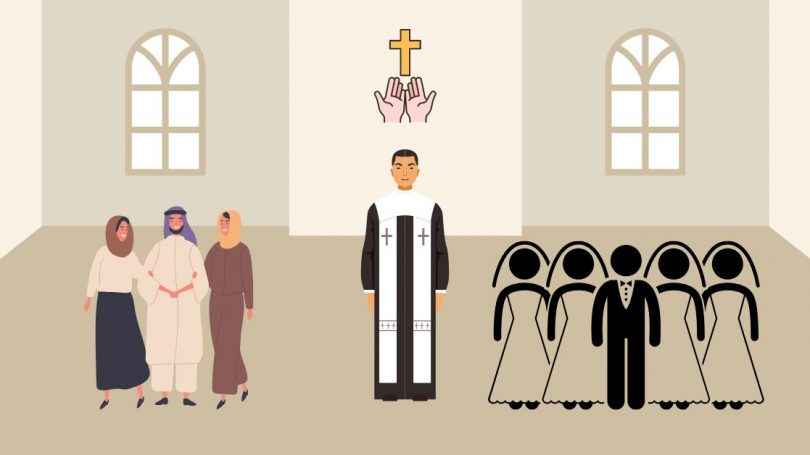 If marriage is explicitly defined in Scripture, which confines it to one man and one woman joining together to become one (Genesis 2:24), then “polygamy” isn’t a marriage at all. So, is polygamy a sin? Let us find out in this post.

What Does the Bible Say About Polygamy?

The Apostle Paul emphasized in Romans 7 that we must be free of looking to the law for our righteousness before we may be associated with Christ by grace through faith. We cannot serve two masters simultaneously. He uses marriage as an example.

The term “binding” in the cited passage originates from the root word Kurios (κυριoς), which is commonly interpreted as “lord.” It conveys the concept of authority. It is the legal authority a court has over persons in its jurisdiction. Death frees a person from legal obligations.

According to God’s law, marriage is a connection to life. Marriage was when Adam and Eve became “one flesh,” as stated in Genesis 2. A male and female union into one flesh is intended to last as long as the two live. In God’s eyes, death is the only moral way to end a marriage.

If a spouse dies, the living partner is allowed to marry another. When the terms of a legal bond are met, the commitment is no longer valid. A new bond is now allowed. Any marriage tie formed while the original spouse is still living is not considered valid by God. It is condemned as immoral and illegal.

Sexual infidelity in a marriage is referred to as “adultery.” This is constantly condemned as sinful behavior in the Bible (Exodus 20:14, Luke 18:20, Romans 2:22, James 2:11, etc.). Marriage is adultery when the marriage tie is not severed (as God defines it). Multiple partners at the same time are expressly prohibited.

Why Did God Allow Polygamy According to the Bible?

Yes, the Bible contains polygamy and concubinage acts among Old Testament saints. However, the description is not the same as the prescription.

Describing an action — even an action by an otherwise honorable “hero” of the biblical story — is not an approval of that deed. Few biblical personalities emerge as courageously as the apostles, but no one suggests that the Gospel writers want us to emulate Peter’s denial of Jesus.

The Pharisees questioned Jesus on why the marriage of one man to a single woman was important to him because God appeared to condone polygamy and divorce. “Because of your hardness of heart, Moses permitted you to divorce your wives, but this was not the case from the beginning,” Jesus responded (Matthew 19:8).

The created order, established by God himself as an image of Christ and the church, is the foundation of monogamy in Scripture. The depictions of polygamy and concubinage in the Bible do not change this fact. Instead, they expose the brutality and misery that come with sexual activity outside of God’s predetermined boundaries.

Jesus condemned polygamy as a distorted form of the lifelong committed commitment of a one-plus-one marriage. Our culture knows this is a special relationship; we strive for it, yet we frequently fall short.

We often spend so much time and money on the wedding and almost as much on the subsequent divorce, but we frequently spend so little time, care, and devotion on the marriage itself.