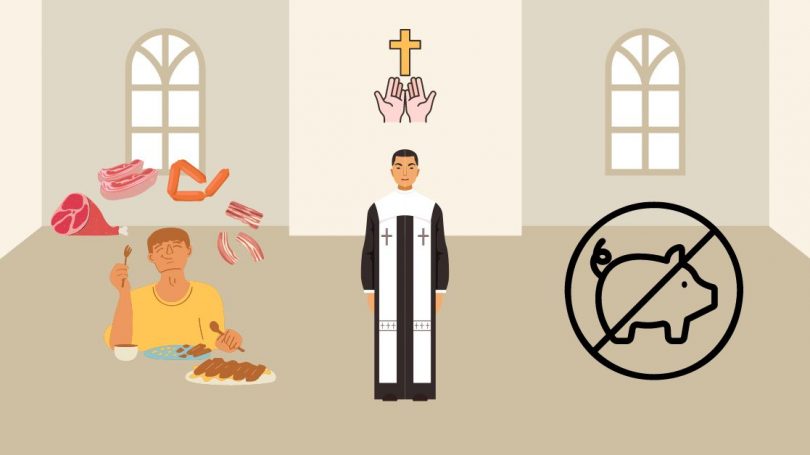 Eating pork has been part of many people’s lives throughout the years. Some religions prohibit eating pork. Thus, it leaves many people wondering whether eating pork is sinful in accordance with the Bible.

Pork, which is meat derived from pigs can be considered unclean.  Despite having a parted hoof, they do not chew their cud like cows. Chewing the cud refers to the process wherein certain animals chew their food, digest a portion, and chew some of their partially digested food. Pigs eat scraps and do not chew their cud.

The Bible’s Answer About Eating Pork

According to Levitical law, pork is prohibited. Those who live in Christ’s freedom, however, are no longer subject to these restrictions.

Questions about whether they should adhere to Jewish dietary restrictions or be allowed to continue eating whatever they pleased arose as Gentiles started to accept Jesus Christ as the world’s savior.

The Apostle Peter appeared to be stuck in the center of this conflict, as God led him into Gentile homes. He was led to saving them while remaining close to Jewish Christians. In Acts 10:11-15, Peter wanted to adhere to Levitical notions of clean and unclean food, but everything was made clear under the new Covenant of Christ’s blood.

Because those who accept Jesus as their Lord and Savior are credited with His righteousness, they no longer need to keep a certain level of outward cleanliness to have inner morality. Thus, all food, including pork, is permitted.

Jesus didn’t just die for our sins when He died on the cross. He fulfilled the Old Testament Law as stated in Ephesians 2:15-16.

Nothing that comes into a person from the outside can defile them, according to Mark 7:18–19. Because it enters their stomach rather than their heart and exits the body after that. This verse emphasizes that Jesus said we could eat whatever we wanted.

You should be careful not to cause division and cause someone to stumble because some people who are vulnerable in faith might not understand this. Stay away from eating pork if the person you are with will be offended. These are all written in  Romans 14:1-3, Romans 14:20-21, and 1 Corinthians 8:13.

Many of Jesus’ first followers were Jewish, and when He died, was resurrected, and ascended back to Heaven, they had to cope with the freedom to now eat foods that centuries of culture had taught them were unclean.

Many of them were accustomed to sacrificing meat to pagan idols in temples that may or may not have housed prostitutes. Some of them doubted whether eating meat sacrificed to pagan gods was moral.

Paul claims that since Christ has purified believers from the inside out, it is permissible to consume anything. He does acknowledge that Christians should be careful not to make those whose consciences are troubled by this idea to feel uncomfortable by forcing them to eat this meat. He exhorts them to behave nicely and use their freedom sensibly. (Corinthians 10:23-29, 31-32).

He goes further in his letter to the Roman church, saying that it is improper to consume meat in the presence of a brother or sister who stays away from doing so. Paul affirms that even though Christians are permitted to eat meat as a result of Christ, this freedom should not be used as an excuse to violate the freedom of others (Romans 14:14-16).

Certain cuts of pork have dangerously high saturated fat content. Therefore, it is wise to choose pork cuts that are low in saturated fat and to restrict how much pork you eat at once in order to maintain your fitness and health.

We must all realize that salvation is obtained solely through the exercise of faith in Christ.