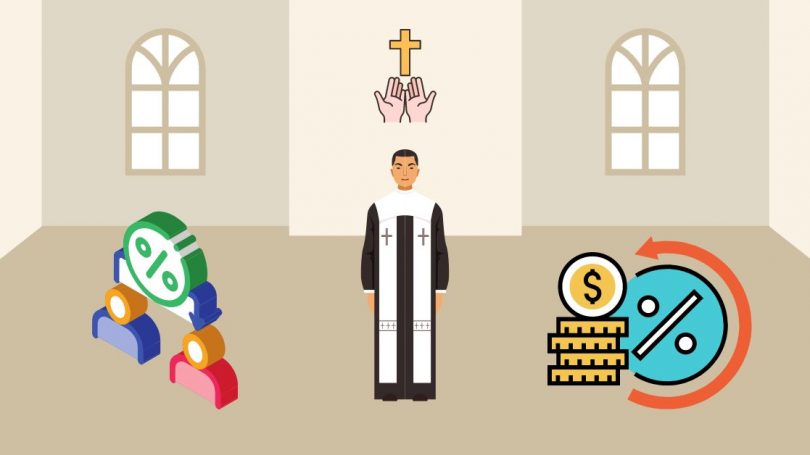 Usury was the practice of charging any form of interest, and it is still practiced today in many Islamic countries, as well as some Christian ones.

Today, banks and financial institutions offer loan services with interest rates. The Bible does not clearly state that this method of financing, which is most likely based on usury, is a sin. However, we should always be wary when something involves money.

According to today’s definition, usury is when a loan is made with an excessively high-interest rate. Usury is typically practiced with the goal of allowing the lender, or usurer, to profit unfairly from the debt. A loan shark is a contemporary slang word for a usurer.

From ancient Greece through medieval Europe, different regions have always prohibited loans with interest. Although the Catholic Church in medieval Europe outlawed the charging of interest, at any rate, the Roman Empire eventually permitted loans with restricted interest rates. The belief that adding interest to a loan is wrong has been linked to religious laws against usury.

What Does the Bible Say About Usury?

Old Testament law forbade Israelites from adding “usury,” or interest, to loans to other Jews, but permitted them to do so for loans to non-Jews (Deuteronomy 23:19-20).

Exodus 22:25 and Leviticus 25:35–38, which include older versions of this commandment, make it clear that they deal with loans given to fellow Israelites who were in need. It was not good for the economy to have to pay back the loan with “usury,” or interest, as that would just increase their debt.

Lending money to foreigners was permitted, though, as it was viewed as more of a commercial and business transaction. By following this guideline, Jews learned the value of helping those in need without expecting anything in return.

The authors of the Old Testament did not envision the complex and vast financial services that have developed over the previous few centuries.

Despite the fact that the Bible says nothing about it, banks are a significant source of loans in contemporary culture. Even while it doesn’t specifically prohibit interest rates, the Bible cautions against obsessing over money and teaches that we cannot worship both God and money (Matthew 6:24).

We are reminded that having money is the source of all evil and that wanting to be wealthy destroys people (1 Timothy 6:9–10). God’s message also includes a warning not to capitalize on the plight of the poor. Loan sharks who take advantage of the poor during their time of need will not enjoy their loot for long (Proverbs 28:8).

Christians would certainly concur that lending at abnormally high rates to people who are in dire straits financially could still be regarded as morally dubious and possibly immoral if one purposefully exploited the underprivileged by charging an exorbitant rate of interest.

Usury has a bad reputation because of some historical depictions of it that have “unjust” or “discriminatory” loan practices associated with them.

Nonetheless, while usury may have evolved and has now become a common financial system, the word of God always reminds us that the love for money is the root of all evil. Whether you lend money with interest or borrow money with interest, what’s important is you are not taking advantage of other people’s weaknesses.