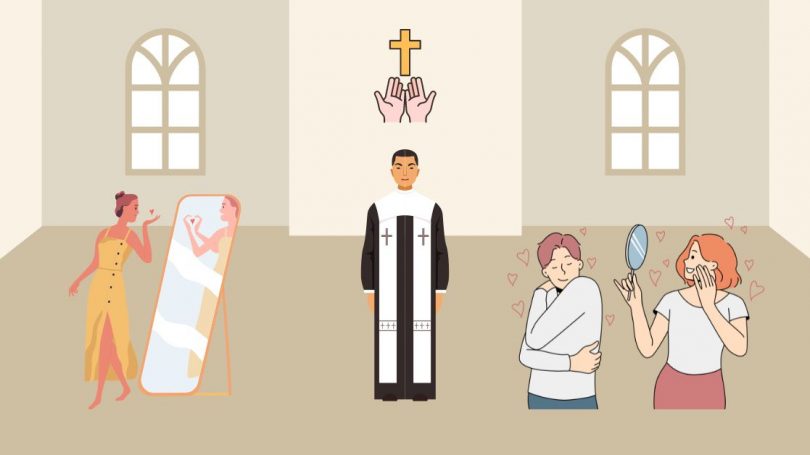 Throughout the Bible, the idea of vanity is a recurring subject. Varying in intensity, vanity can have a subtle or overt impact. You might be asking if vanity is a sin in the Bible due to its destructive nature.

Vanity is never portrayed favorably in the Bible. Most vain people are haughty, self-centered, and self-absorbed. Thanks to media trends and social media, vanity seems to be at an all-time high. Because He does not want us to be vain, God is not happy with this situation.

Read on to discover what God’s Word says about vanity.

He was endowed with knowledge, wealth, and all of his heart’s desires. Despite being fortunate in so many different ways, he was nonetheless unhappy. Solomon realized toward the end of his life that obeying God is the only thing that really matters.

Self-indulgence and pride are the foundation of vanity. In order to follow God, one must be humble and unselfish, not vain. We are to watch out for the welfare of others rather than just our own interests.

Jesus lived a life that was the total opposite of vain. He was kind and modest, and he gave his life to save the world (John 3:16-17). Jesus, who is God in the flesh, might have had the right to be vain if anybody could, but instead, he chose to be humble and adopt the traits of a servant.

Jesus does not possess vanity since it is a sin. Believers are not required to adopt the cultural vanity trend because vanity is a sin.

Why is Vanity Dangerous?

One issue with vanity is that it can impair judgment. You might have an excessively high view of who you are or what you accomplish as a result.

Additionally, it could cause you to chase after things that are merely superficial. You may become unaware of your dependence on God as a result of either of these things.

Vanity can lead to a variety of negative outcomes, including transgressing God’s will, harming others, and harming oneself. Christians need to cover themselves with the Lord Jesus Christ despite the fact that modern society has normalized vanity (Romans 13:14).

In the life of a Christian, vanity has no place. A Christian’s life will not be an acceptable example of Christ if vanity characterizes it. One who is vain becomes obsessed with their beauty, harms others in the process, and minimizes others.

Usually, vain people are obsessed with themselves, but vanity may also make you more rigid or hard on yourself. It’s critical to understand the difference between self-love and vanity. Self-love is a good thing since we should love ourselves as much as God does.

Is Vanity a Sin?

Vanity is undoubtedly a sin, in my opinion. It is sin if you have an excessively proud perspective of yourself or your actions.

The Bible expressly cautions us against exaggerating our own importance. A person becomes grander in their own views than they actually are when they are overtaken by vanity.

King Saul is another figure in the Bible who revealed themselves to have a great deal of vanity.

King Saul, who was attractive, an expert warrior, and God’s chosen, allowed vanity to rule his actions (1 Samuel 9-10). Unfortunately, Saul’s ego got the best of him and led to his eventual demise.

Saul made the decision to go with his own intuition rather than heed the instructions God sent to him through Samuel. Saul’s conceit finally resulted in the crown being awarded to David instead of Saul. Saul killed himself during his final conflict out of dread (1 Samuel 31:4).

Depression, ongoing issues, and a desperate desire to end one’s suffering are the causes of suicides. Saul’s, however, was brought on by the final vanity strike. He would rather commit himself than let a Philistine kill him.

Ask God for guidance right away if you are struggling with vanity. Give God your whole heart and tell Him what you wish to change.

Ask Him to help you leave the ways of vanity behind so that you can become a servant like Christ. Only when you are living according to God’s Word can you experience happiness and joy.

Decide today that you will follow Christ and the example He has set for you. Despite the fact that He is the Name above all names, Jesus never indulged in vanity. Christians must never have a higher regard for themselves than is justifiable.